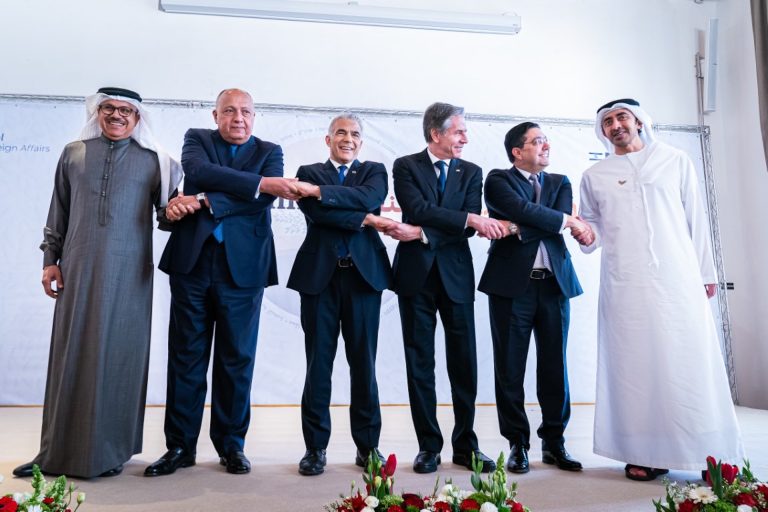 As part of the summit’s agenda, the participants discussed joint challenges as well as regional and international matters of shared interest, as well as efforts to achieve peace and stability in the region and enhance international peace and security. Sheikh Abdullah thanked Yair Lapid for the invitation, stating that the UAE is supportive of and backs all international efforts to promote peace, security, stability, and development both in the region and beyond it. The UAE views peace as the cornerstone of comprehensive and sustainable development for society.

To build a prosperous future, nations must establish values such as peace, coexistence, and tolerance. Sheikh Abdullah, Lapid, Blinken, Shoukry, Bourita, and Dr. Al Zayani attended a press conference after the Summit. According to Sheikh Abdullah, Israel is both a partner and a friend, and we appreciate the invitation. Despite the 43-year-old peace treaty, neither Egypt nor Israel have had a chance to reframe the narrative that portrays Israelis and Arabs as enemies of one another. He explained that their goal was to create a new future for them and their children.

For me, as well as Nasser Bourita and Dr. Abdullatif bin Rashid Al Zayani, it is an entirely new experience to be in Israel. It’s time to get to know Israel better since it’s been part of the region for so long.” Over 300,000 Israelis have been visiting the UAE in the past year and a half, and the Israel Pavilion at Expo 2020 Dubai welcomed nearly two million visitors, he explained.

Sheikh Abdullah called on everyone to join the battle against hate speech and violence in the region, saying “we will undoubtedly succeed, and we can continue to improve in many areas.” He noted that Egypt has demonstrated that there is great potential for cooperation, and he pointed out that Blinken’s presence at the summit is significant, as it demonstrates the US’ strong support for a more peaceful and prosperous world.