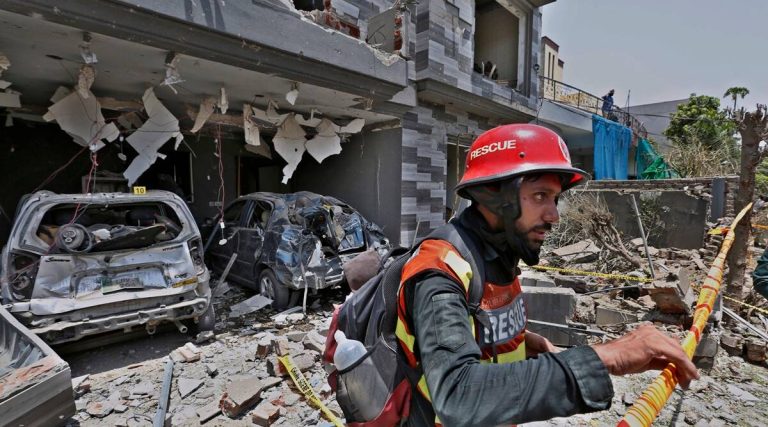 A powerful car bomb exploded outside the residence of the 2008 Mumbai terror attack mastermind and chief of the banned Jamat-ud-Dawa (JuD) Hafiz Saeed in the provincial capital of Punjab on Wednesday, killing at least three people and injuring 21 others. The blast took place at a police picket outside Saeed’s house at the BOR Society in Johar Town around 11 AM. 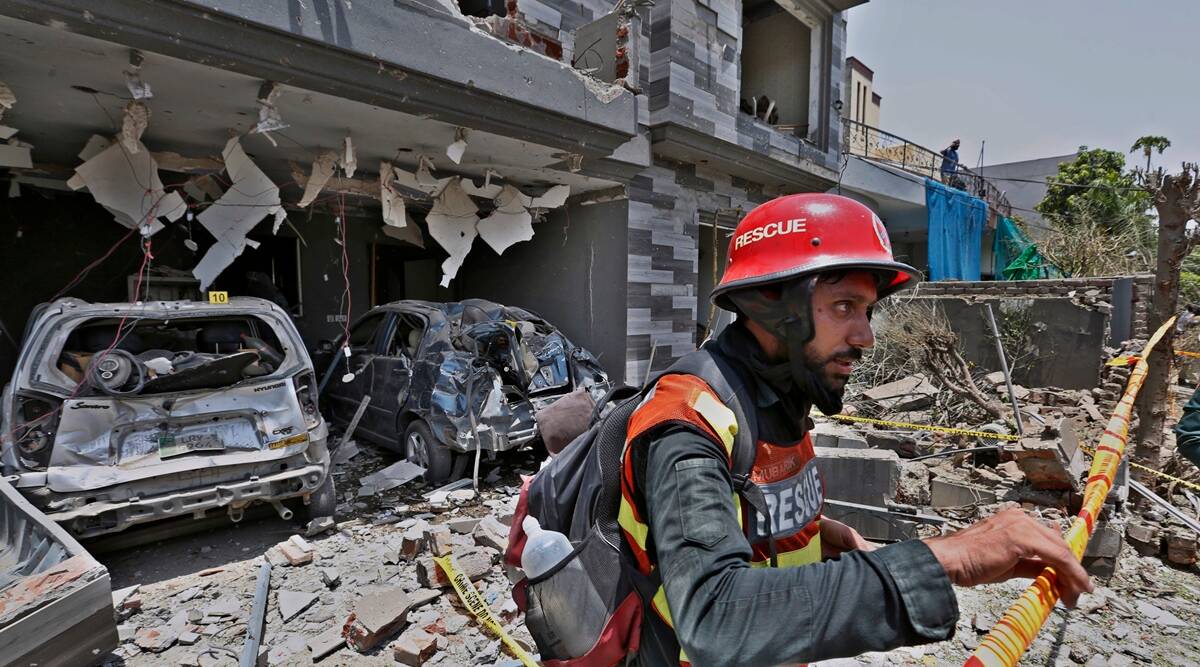 Eyewitnesses and news camera footage showed that a number of vehicles and motorbikes in the area were damaged. The front of several houses was badly damaged. Police cordoned off the entire area and started an investigation.

The blast took place at a police picket outside Saeed’s house at the BOR Society in Johar Town around 11 AM, resulting in serious injuries to some police officers guarding his house. The windows and walls of Saeed’s house were damaged from the impact of the blast, Dawn News reported. The 71-year-old radical cleric has been serving a jail sentence at the high-security Kot Lakhpat Jail in Lahore for his conviction in terror financing cases. The blast sparked rumors that Saeed was present in the house.
Some of the injured, including children, are in critical condition, a hospital spokesman was quoted as saying. No group has claimed responsibility for the blast, which used a vehicle-borne improvised explosive device.
A car parked close to a house exploded, setting ablaze nearby cars and motorcycles, a witness, Fahim Ahmad, told reporters at the scene. The Counter Terrorism Department (CTD) has taken over the blast site and investigating from all aspects.
According to an initial report prepared by investigative agencies, more than 30 kgs of explosives were used in the blast, Geo TV reported. The initial report also said that “foreign-made materials” were used in the blast. It said the material had been planted onto a car and the device was detonated remotely, the channel reported, citing sources.
A 3 feet deep and 8 feet wide crater has been formed at the site of the blast, the report said, adding that the blast caused damage within a 100-square feet radius. Citing witnesses, it said the windows of nearby houses and buildings were shattered in the explosion. The sound of the blast was so loud that it was heard faraway.
A roof of a house caved in because of the impact of the blast, says Rescue 1122. Several cars parked close to the buildings were also damaged. The injured people have been shifted to the Jinnah Hospital where the condition of six of them is said to be critical. The injured also include policemen. The condition of six injured of the 17 admitted to hospital is critical.
Saeed, a UN designated terrorist whom the US has placed a USD 10 million bounty on, has been convicted for 36 years imprisonment in five terror financing cases. His punishment is running concurrently. Saeed-led JuD is the front organization for the Lashkar-e-Taiba (LeT) which is responsible for carrying out the 2008 Mumbai attack that killed 166 people, including six Americans.
The US Department of the Treasury has designated Saeed as a Specially Designated Global Terrorist. He was listed under the UN Security Council Resolution 1267 in December 2008. The global terror financing watchdog Financial Action Task Force (FATF) is instrumental in pushing Pakistan to take measures against terrorists roaming freely in Pakistan and using its territory to carry out attacks in India.